Lecturer, Department of Preventive & Social Medicine, University of Otago
Richard’s work has focused on researching ‘spirituality’ on and off for 30 years. In 2010 he finished a PhD looking at spirituality in end-of-life care in New Zealand hospices. His Master’s thesis examined spirituality in New Zealand State schools, and he has academic qualifications in theology, english literature, religious studies, and public health. Richard has worked as a secondary school teacher, a health promoter and is currently a lecturer in health promotion in the Department of Preventive & Social Medicine at the Dunedin School of Medicine, University of Otago, with research interests in spirituality in healthcare, psycho-social-spiritual supportive care in cancer, and health promotion.

CEO Bishop’s Action Foundation
Simon is currently Chief Executive Officer of the Bishop’s Acton Foundation which works as a catalyst for change supporting communities and organisations to address as yet unmet needs.  He has extensive experience in community development, capacity building, social research, governance and management.  In 2009 the Foundation published the findings of research into the impact of spirituality on the well-being of older New Zealanders and continues to explore the relevance of spirituality to social and community well-being.  Simon has an MPhil with a research thesis that examined governance in community sector organisations and has completed Post-Graduate Diplomas in Development Studies and Public Health.  He is President of Social Development Partners, one of the community sector’s umbrella organisations, is an accredited business mentor with Business Mentors New Zealand and a coach of junior level cricket.

Research Fellow, School of Nursing, Faculty of Medical and Health Science, Auckland University
Tess (Ngai Tai ki Tamaki and Ngati Pukeko) is a qualitative researcher who specialises in Māori palliative care, death, dying and bereavement. She has previously worked as an ACC registered sexual abuse therapist and Problem Gambling counsellor in the Bay of Plenty region. Tess has contributed to two Hospice NZ Governance Boards and she sits on the ACC Sensitive Claims Advisory Board and the Māori Working Group. Tess is currently a co-applicant and lead researcher on the Te Pākeketanga Study (a sub-study of LiLACS NZ; a longitudinal study on successful ageing for people of advanced age). Te Pākeketanga investigates the end of life preferences and experiences of older people and their whānau and families at the end of life within 5 geographical areas. Previous to this, Tess won an HRC post-doctoral grant to lead the Kia Ngawari study (2010-2012). Kia Ngawari investigated the end of life experiences and cultural needs of adult Maori who had a life limiting illness, and their whānau (family).

Director Selwyn Centre for Ageing and Spirituality
Chris Perkins is an old-age psychiatrist. Since 2008 she has been director of the Selwyn Centre for Ageing and Spirituality (The Selwyn Foundation). The Centre promotes spirituality as part of holistic care for older people through research, education and advocacy. She is also the chair of the steering group of the National Dementia Cooperative and a member of the Board of Alzheimer’s NZ. She has a special interest in spirituality in dementia.

Charles Waldegrave, Coordinator Family Centre Social Policy Research Unit, Anglican Social Services, Hutt Valley.
Charles Waldegrave is a psychologist, a family therapist, an Anglican priest, a social policy analyst and researcher. He is a Coordinator of the Family Centre in Lower Hutt, Wellington and he leads the Social Policy Research Unit there.  He is a joint leader of two large research programmes: the New Zealand Poverty Measurement Project (NZPMP) and the New Zealand Longitudinal Study on Ageing (NZLSA). With his colleagues, he has also helped develop an internationally recognised approach to contextualizing therapeutic work around cultural, gender and socio-economic equity, known as ‘Just therapy’. He has published extensively in social policy and therapeutic journals in New Zealand and internationally.

We would like to thank a range of people who have commented on earlier drafts of this paper. 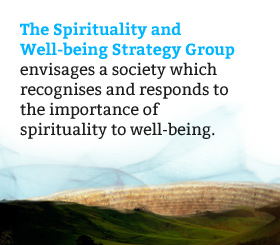 If you want to more quickly and easily transport or print the entire paper, here is the PDF.

A resource for parents of primary school children

The Aotearoa Project
The Amateur's Guide To Death & Dying

conversations about medicine and life

How Contemporary Spirituality Makes Us Stupid, Selfish and Unhappy

Discussion about the spirit and spirituality.